Notice: WP_Scripts::localize was called incorrectly. The $l10n parameter must be an array. To pass arbitrary data to scripts, use the wp_add_inline_script() function instead. Please see Debugging in WordPress for more information. (This message was added in version 5.7.0.) in /var/www/clients/client230/web630/web/wp-includes/functions.php on line 5663

10 Years of E-Mobility in Germany: Nowhere Near Open Source

Electric cars, for many, will bring about the fundamental turn in mobility. The opening conference of our dear lab neighbours MENNEKES, a leading producer and developer of charging infrastructure (plugs and charge columns), revealed the status quo of e-mobility in Germany and of our self-understanding as a car nation.

At first sight, it struck me that there are hardly any women on the list of speakers and at the event in general. But then again the most powerful woman of Germany, Chancellor Dr Angela Merkel gives her blessing on the occasion of the opening of the Berlin site of MENNEKES at EUREF Campus. The family-owned company, that is world market leader for CEE connectors, held a symposium titled “10 years of electromobility – the present becomes the future“, which took place in the Audimax of the Wasserturm. The head of the “German National Platform for Electromobility“, Prof. Dr Henning Kagermann, opened the event with the claim: E-mobility was ready for everyday implementation. The targeted milestone for 2030 is to have 6 Mio. electric vehicles on the roads of Germany. Concerning jobs, he prognoses a rise of labor in the e-mobility area up until 2030, then it could decrease, but «we have time» Mr Kagermann says. Oddly enough, climate change is not a hurry and also in other realms things are going just great: Germany is a successful player in e-mobility with high market shares of German producers (taking China aside), numerous patents in the field (as if this had to be something good) and added value through industrial fabrication taking place in Germany (except the battery cell which is the core of that technology). And then there is his simple conclusion, e-mobility is sustainable, that makes this fairytale perfect.

Chancellor Dr Angela Merkel then points to the fact that E-mobility is not just a form of propulsion technology, but a cornerstone of autonomous driving. She describes the car of the future as a mobile digital entity, a well-equipped living room, and a rolling computer. Then she concludes that the development of this rolling thing has to involve some arrangements between developing and fabricating companies, which apparently will need a little softening of laws set out by the Federal Cartel Office. Whether or not development in the open would be another solution is not a question on anybody’s mind at this event.

Prof. Dr Günther Schuh, CEO of the Aachen based e.Go mobile AG, provides an affordable vehicle to make the mobility turn happen. He calls his approach the «Revolution of Urban Mobility» and presents the eGo Life, a 15.000 EUR electric car made in Germany. However, interesting is its genesis in the context of research at RWTH Aachen: Prof. Schuh set out to conduct a comparative analysis of production costs of an electric car in China and Germany. With all his insights he was then able to put his research into practice and actually produce a car with the same costs or lower as in China. By that moment it seems to be as if the vehicle part of e-mobility is not the problem here. The buck is passed back to the charging infrastructure. Then comes Prof. Dr Andreas Knie of innoz onto the stage, self-claimed «bad guy of the party», and destroys most of the perfect fairytale established by the prior speakers. He draws the comparison between the mobility and energy turn and points out that «old» technologies, like brown coal or stone coal, do not happily disappear when a greener alternative is available. Instead, it will need an «iPhone-Effect» to turn things around and make e-mobility dominant. Furtheron Prof. Knie opposes to Dr Merkel by saying that innovation is nothing linear or gradual, but something highly uncertain and at times «illegal». That is because German regulation protects the old, e.g. diesel fuel, to sustain the compiled expertise in the respective field. Furthermore, most innovations in Germany are stalled on authority level, in the case of e-mobility that is at the public works service. The conditions you will find here at EUREF Campus for electric charging are only possible because it is private, not public ground. 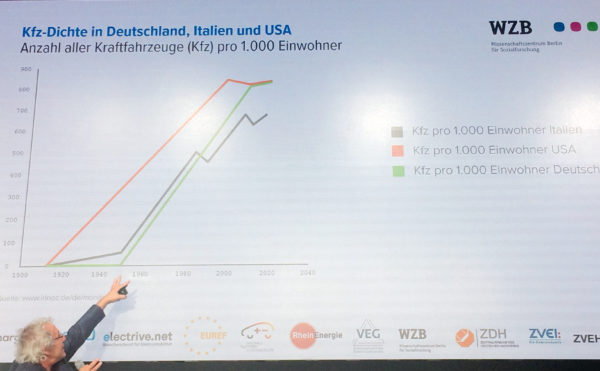 Prof. Knie gives an insightful recap of German automotive history, highlighting that certain societal developments within the mobility realm were forced. Up until 1960, Germany was a country without cars (see figure). As early as 1939 political interests sought to raise the attractivity of owning a car. The «Reichsgaragenordnung» was intended to ensure that parking spaces were made available to potential vehicle owners at each residential building. And still today a version of this regulation is in place, ensuring parking spaces for privately used cars free of charge. In 1953 the speed limit was omitted in order to get more people to buy a car. In 1970 it became possible to set a fixed amount of money for each driven kilometre off against tax liability. Today there are 47 Mio. cars in Germany. To understand why things on our streets are not changing as much as actually necessary Prof. Knie uses this short genesis of a “car nation”. He continues his thoughts by highlighting the economic and social role of the largest Internet corporations that “profoundly influence what we think and feel”. For Prof. Knie, their role in providing for shared mobility options is also very important. A major challenge for all innovation and change in the mobility system sees Knie in suffocating regulations, such as the Passenger Transport Act, being a hurdle for new forms of ridesharing entering the market and conducting the mobility experiments we need to make changes real for you and me.

As I have learned from this conference e-mobility is right around the corner, vehicles are available and even affordable. The question of mass dispersion is really up to the charging infrastructure. In this field, I am happy to have come across open source software and protocols that hopefully will lead the way to an open development of electric mobility that will enable the participation of smaller players “in the game” too. I will keep an eye on this topic, and so should you!