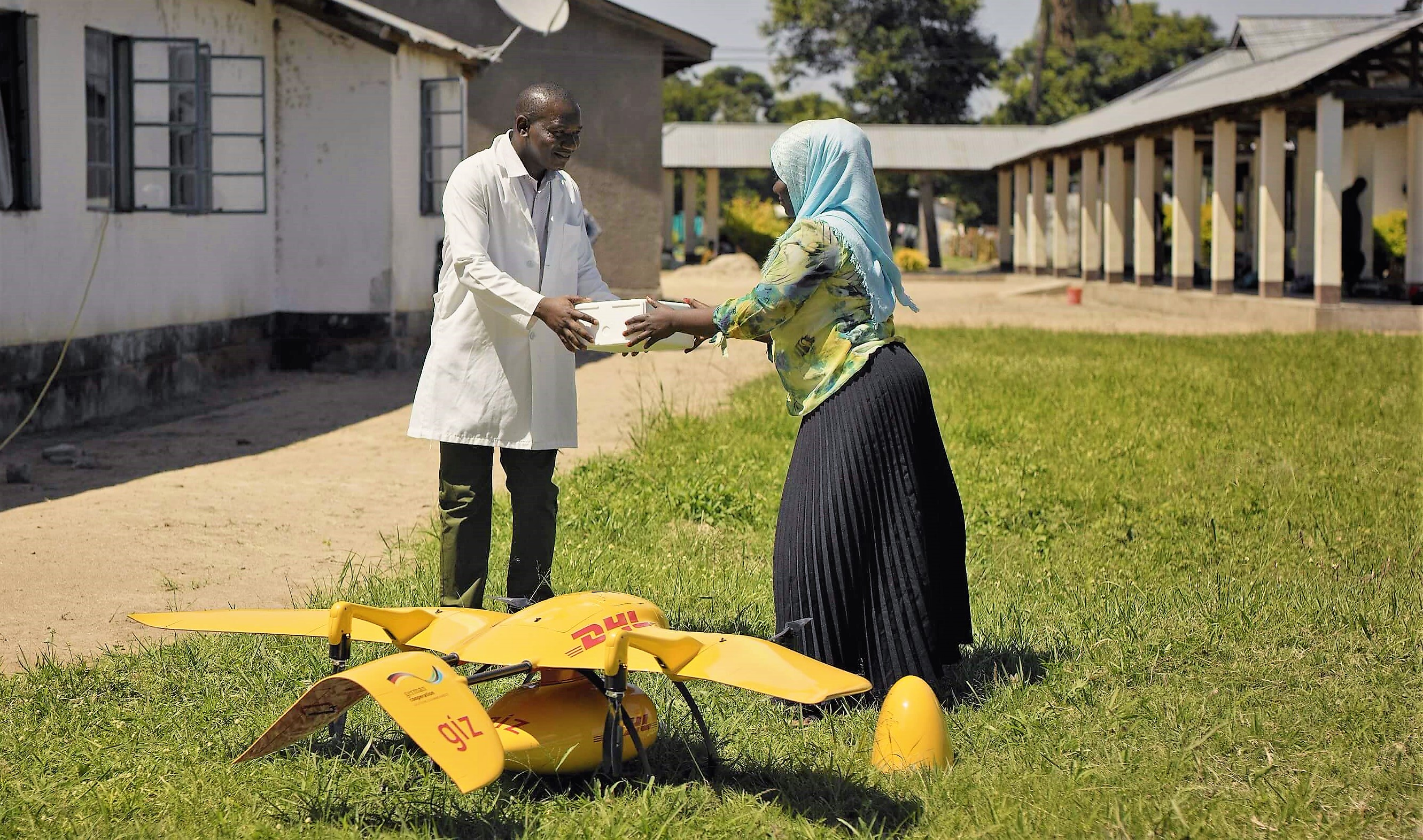 Delivery of Medicine Through the Air

Revolutionizing medical care in remote areas with the help of drones, the “Deliver Future” project proves that this is not only a dream of the future. Drone manufacturer Wingcopter, DHL and the German Corporation for International Cooperation jointly launched the “DHL Parcelcopter 4.0” and supply the Tanzanian island of Ukerewe with medicine at record speed.

The German drone manufacturer Wingcopter, the parcel service DHL and the German Corporation for International Cooperation on behalf of the German Federal Ministry for Economic Cooperation and Development successfully tested the delivery of medicaments by drone to an island in Lake Victoria over a period of six months in 2018. The independently flying DHL parcelcopter 4.0 completed the 60-kilometer flight from the mainland to the island in an average of 40 minutes. In total, more than 2.200 kilometers were flown and about 2.000 flight minutes were completed in the project.

The drone opens up new opportunities because in many regions of Africa logistics in the health sector, especially the medical care of rural hospitals and pharmacies, represent an enormous challenge. The reasons for this are often the poorly developed infrastructure and the impassable terrain. Medical care for the 400,000 inhabitants of the Ukerewe Island district in Lake Victoria, for example, is severely restricted. The 240 kilometer stretch over land takes six hours, which means that it is not possible to supply medical facilities for the emergency care of the population with medicines that only last short time and require refrigeration.

The special clue is that the DHL Parcelcopter 4.0 takes off and lands vertically and requires hardly any infrastructure apart from a small landing area. The aircraft can be loaded with blood and laboratory samples for the return flight. The future deployment of the parcel drone could not only solve the problem of supplying medical facilities with medicines; this would make it possible even to combat bigger threats, like the spread of viral diseases, such as Ebola, at an early stage.

Wingcopter is a multiple award-winning German manufacturer of innovative drones for logistics, surveying, reconnaissance, and inspection. With its unique, patented swivel rotor mechanism, the startup closes the gap between commercial drones, helicopters and aeroplanes and thus achieves a new dimension of efficiency. The electrically powered Wingcopter drones, like multicopters, can take off and land vertically in the smallest of spaces. As soon as the rotors are swiveled, the drone transforms into an unmanned aeroplane in a matter of seconds. This transition enables ranges of up to 100 kilometers and a record speed of 240 kilometers per hour. Even in strong winds or heavy rain, the Wingcopter flies autonomously and reliably.

The Dubai Electricity and Water Authority have already purchased a Wingcopter. Equipped with a high-quality camera system that transmits its pictures live, it independently inspects high-voltage power lines in the Arab country from the air.
The British company Zoological Society London is also one of the customers and plans to use the Wingcopter with a multi-spectral camera and a laser scanner to measure and scan large parts of the Indonesian rainforest in three dimensions. The condition of the plants there is also to be recorded. And they even want to track down poachers by having a thermal imaging camera attached to the copter as a third Sensor.

In southern Africa, the Wingcopter with similar equipment is to produce maps of agricultural areas so that local farmers can cultivate their fields more efficiently.

And where are the benefits for you?