The Age of Robots: Friends or Enemies?

The International Federation of Robotics (IFR) presented preliminary statistics from the World Robotics Report, which shows that a new world record of 384,000 units has been shipped in 2018, an increase of one percent over the previous year.

We might ask ourselves if technological development brings us “friends”, like the famous Droids R2-D and C-3PO of Star Wars, or “enemies” who we should fear. What used to be just science fiction, today is a reality that never stops surprising us. The robots are here and now!
The beginnings of robotics date back to the 18th century, when the French textile-merchant Joseph Marie Jacquard invented the programmable machine to weave identical fabric patterns.
In 1920, the word “robot” was first used in the play by Czech dramaturge, Karel Capek. The play, Rossum’s Universal Robots, was about machines created to help humanity and then confronted with society, initiating a revolution that finally destroys humanity. Dramatic but not prophetic (I hope so!).
In 1939 the Three Laws of Robotics designed by Isaac Asimov were released:
1. A robot may not injure a human being or, through inaction, allow a human being to come to harm.
2. A robot must obey the orders given to it by human beings, except where such orders would conflict with the First Law.
3. A robot must protect its own existence as long as such protection does not conflict with the First or Second Law.

From here on, thousands of exemplary robots took place…

In the automotive industry

Artificial Intelligence (AI) is taking giant strides, from autonomous vehicles to the transformation of most aspects of the manufacturing process and design in the automotive industries. According to Global McKinsey “robotics and AI technologies, such as automatic learning (which gives computers the ability to learn without explicit programming) have advanced to the point where it would be possible to automate at least 30 percent of activities in approximately 60 percent of occupations in both the United States and Germany”.
There are five major markets representing 73% of the total global sales volume in 2017: China, Japan, the Republic of Korea, the United States and Germany. 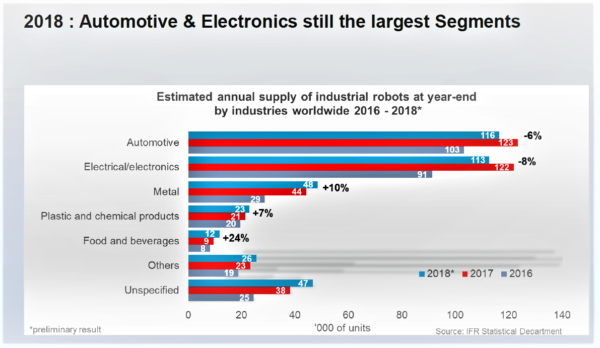 The idea, that robots will in the future be able to carry out many activities that humans currently do, is present in the people collective. However, there is an incentive in the data given by Bloomberg, that results in: “out of 13 automobile manufacturers listed on the stock exchange with at least 100,000 workers at the end of its most recent fiscal year, 11 had more staff compared to the close of 2013”. The explanation for such numbers is due, says Steven Man of Bloomberg Hong Kong, to the fact that automobile manufacturers in China and other emerging markets favor human labor because it requires less initial investment. In developed markets, tasks that can be handled by robots were automated years ago, and automakers are now increasing hiring in research and development as the industry evolves.

One example is Mercedes-Benz, where robots are being replaced by humans, as the company requires human skill as it moves toward offering more personalised options for consumers. In the same way, various Toyota factories in Japan prefer humans to make sure their factory workers are qualified employees who can figure out how to make automobile production more efficient. Vehicles that require a specific design or a detailed and customized configuration in their manufacturing cannot be carried out by industrial robots because they take a lot of time to be programmed.
Recently, however, companies are betting on new strategies. Mercedes-Benz, BMW, General Motors and Ford have begun to implement robots designed to work with humans, the co-bots. Now it’s collaborative work. While the co-bots perform simple jobs or tasks that require physical effort, the human worker can perform tasks that require intelligence and creativity based on personalized designs.

I personally believe that robotics is not a threat. The competition between automotive manufacturers is getting stronger and it, therefore, requires intelligent production strategies. While industrial robots are focused on the simple tasks of industry, Mercedes Benz, BMW, General Motors and Ford are examples of companies that are investing in teams made up of humans and machines. Therefore, we can say “better together than separated”!